In my Public Opinion & Survey Research course, we recently examined how national attitudes on particular issues evolve over time. Typically, attitudinal change on social issues occurs slowly over time as the result of generational change. Contrary to this expectation, the past few years have witnessed a dramatic transformation in attitudes concerning the rights of gays and lesbians. The American National Election Survey began asking questions concerning support for gay and lesbian rights beginning in 1988 as these issues began to enter the national political agenda in a significant way. The survey has consistently asked two sets of questions concerning gay and lesbian rights over the past 30 years. The first asks individuals whether they support laws that would protect gays and lesbians from job discrimination. Figure 1 tracks the percentage of Americans collectively, as well as those identifying as “strong Democrats” and “strong Republicans,” who stated that they favored these anti-discrimination laws. The numbers reveal that a slim majority of Americans supported anti-discrimination legislation in 1988. Over time, support for anti-discrimination laws has grown to be the overwhelming position with over 83% in favor as of 2016. As the graph makes clear, significant differences remain between Democrats and Republicans on this question, but even for strong Republicans 65% now favor laws to protect gays and lesbians against job discrimination up from only 41% in 1988. The data thus demonstrate that protections against job-discrimination for gays and lesbians has gone from being a highly contentious issue to one that is largely normative for the population as a whole and increasingly for Republicans. 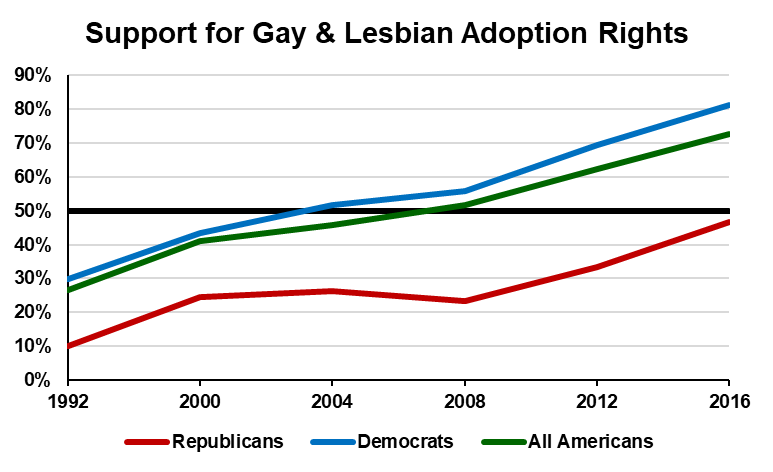 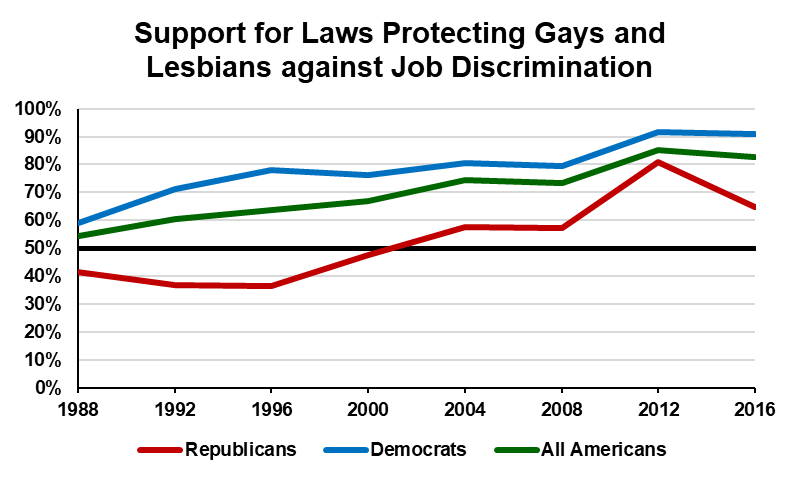 The graphs above demonstrate a remarkable shift in attitudes towards the rights of gays and lesbians. In the 1980s and 1990s, gay rights were seen as a highly polarizing wedge issue. By 2016, support for gay and lesbian rights is now the dominant position for Americans with support, to a significant degree, crossing party lines. This dramatic shift in attitudes does not mean, of course, that gays and lesbians no longer face significant discrimination, but it does reflect a sea change in attitudes rare in the study of American opinion.