There is a growing consensus among political scientists that American politics is becoming increasingly polarized, but there remains much disagreement concerning its causes anc character..  There is broad and consistent evidence that party leaders and elites have become more polarized; however, there remains significant questions about whether the broader public has become more polarized (see Fiorina and Abrams review of the literature).   The evidence is mixed concerning whether Americans are increasingly polarized on major political issues.  Yet, there is growing evidence that “affective” polarization may be on the rise.  Affective polarization refers to how individuals feel about members of the opposite party.  Iyengar and Westwood argue that partisan attachments have become deeply ingrained identities, similar to race and ethnicity, that can invoke powerful hostility towards members of the opposite party.  In a series of experiments, they uncovered a strong propensity for partisans to express open hostility toward members of the opposite party and to discriminate against them when given the opportunity. 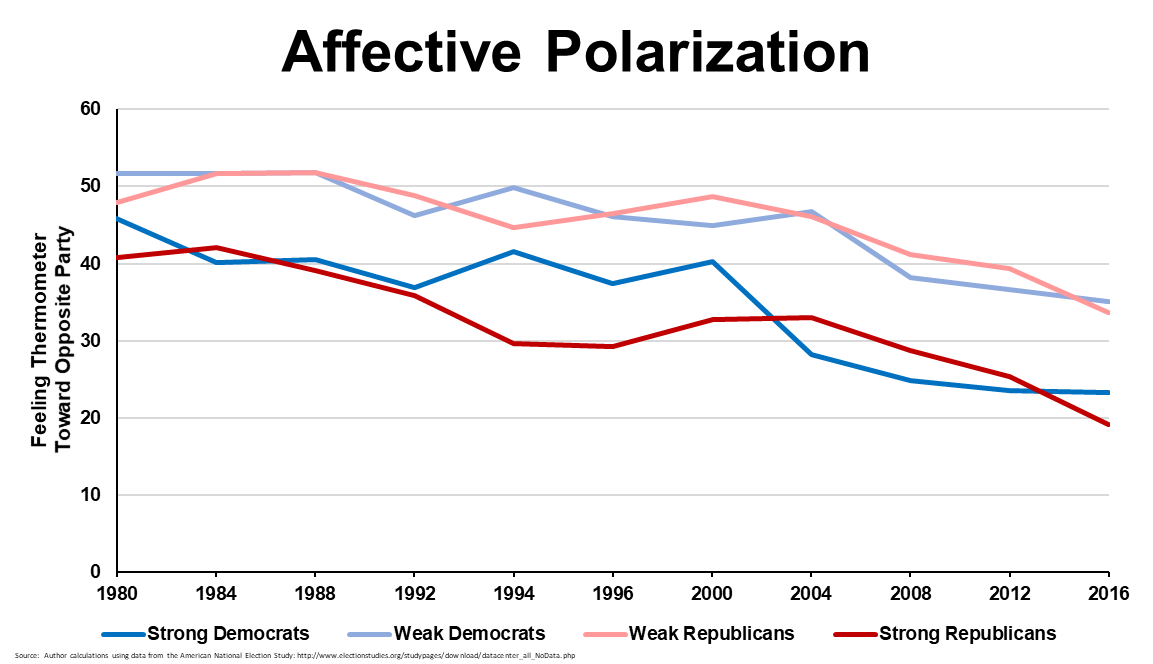 Interested in whether this affective polarization was changing overtime, I turned to the American National Election Study.   In every election year since 1980, the ANES has asked individuals to assess their feelings toward the Republican and Democratic Party on a 100-point scale where scores above 50 reflect “warmth” toward the given party.  The table below presents the average feeling thermometer score for the opposing party (e.g. the score Democrats gave to Republicans) for those identifying as “strong” and “weak” partisans.  The graph reveals growing hostility for strong and weak partisans on both sides of the aisle.  For strong Democrats, the average feeling thermometer score for Republicans has fallen from 46 to 23.  For strong Republicans, the thermometer for Democrats fell from 41 to 19.  Though, not surprisingly, the scores for weak partisans are less hostile, they too have fallen.  The feeling thermometers of both weak Democrats and weak Republicans hovered around the high forties until around 2004, where both groups saw significant declines into the low thirties.

In thinking about the meaning of this increasing affective polarization between groups it is important to recognize that the sizes of the groups have also changed over time.  As the graph below demonstrates, the percentage of the population strongly identifying with either party has grown from 22% in 1980 to 33% in 2016.  The increasing proportion of the population strongly identifying with one party or anther intensifies the overall polarizing effects seen in the previous graph.  Essentially, strong partisans are growing both in number and in hostility toward the other party.  At the same time, the graph shows some contrary trends.  The percentage of “leaners” (people who identify as independents, but upon further questioning suggest they lean toward one party or the other) has also substantially increased from 24% of the population to 31%.  This means that the total percentage of the population identifying with either party (weakly or strongly) has declined slightly from 63% in 1980 to 58% in 2016. 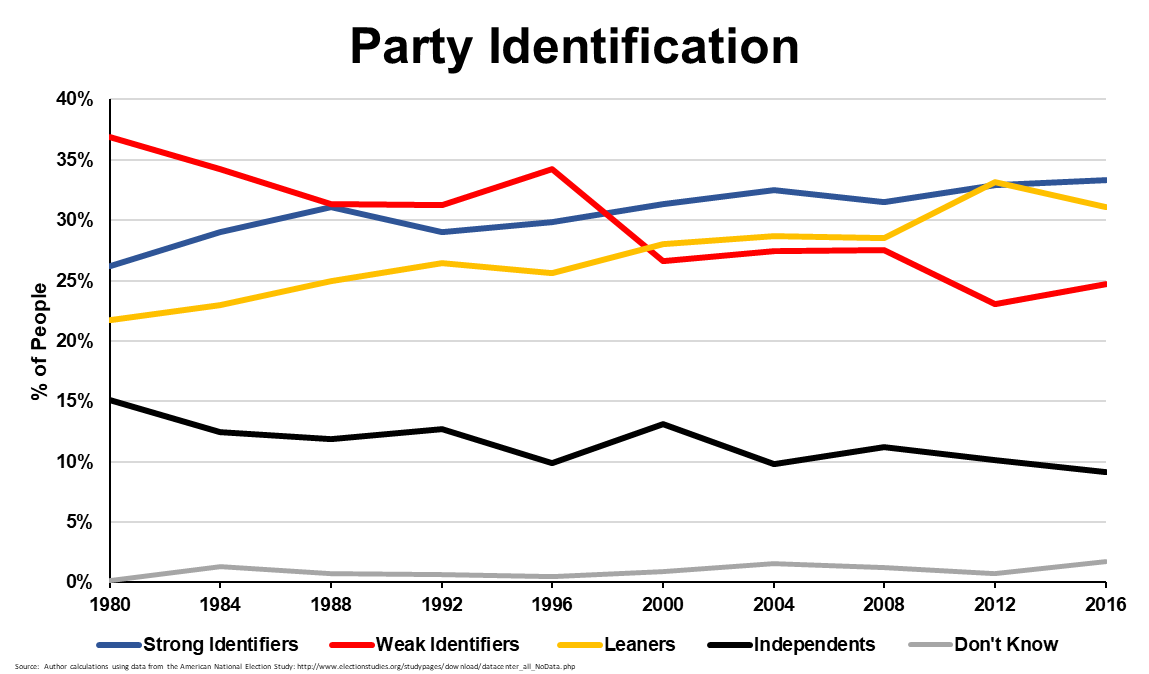 Taken together, these graphs provide further evidence that whether or not the public is becoming more sharply divided on political issues there is clear evidence that we are becoming more polarized in our feelings toward one another.  This affective polarization likely obscures the significant opportunities for shared interest and compromise between Republic and Democratic voters on policy issues, but that is a topic for another post.